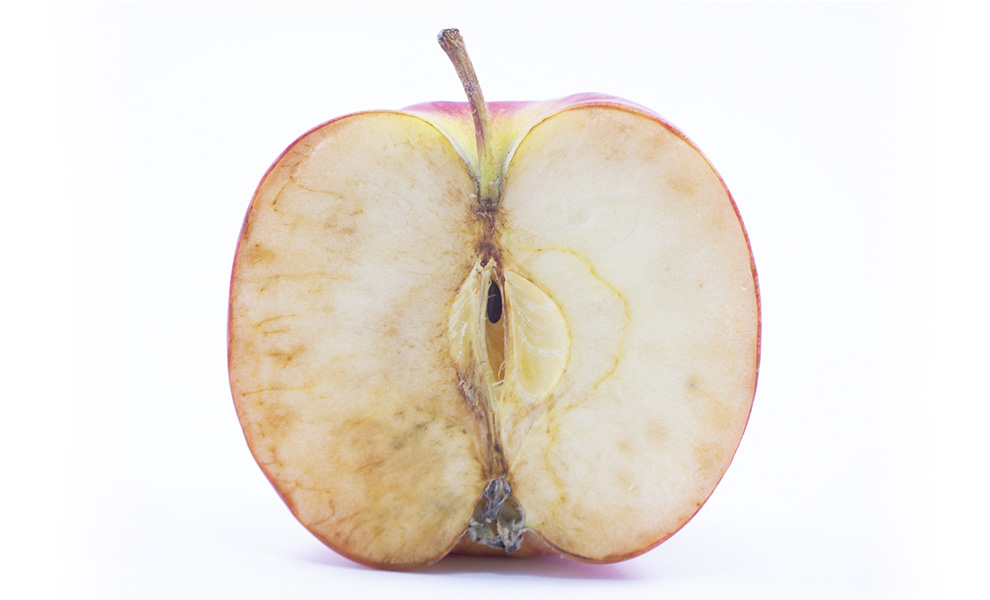 Oxidation is an essential function for life. Oxygen supplied via the respiratory system is vital for such things as digestion of nutrients, cellular metabolism and other normal bodily functions. Oxidation is the term that describes the action of oxygen as it is utilised in these processes. Oxygen is a highly reactive molecule and oxidation can cause health problems by forming molecules called ‘free radicals’. These free radicals are capable of attacking the healthy cells of the body which leads to cell damage, cell death, diseases and other health disorders. Cell damage caused by free radicals can be a major contributor to aging as well as to neurological, cardiovascular and immunological disease conditions. Visual evidence of the process of free radical oxidation can be seen in the browning of apples that have been cut open and left. It is also visually evident in fruit that has been kept too long and has begun to rot, become soft and discoloured. In the human body it is a visual sign of aging with brown patches and wrinkling of the skin.

What are Free Radicals?

Free radicals are created when oxygen is utilized by the body. They are also introduced to the body when breathing contaminants in the environment such as exhaust fumes, chemical fumes etc that contain these radicals. However, the body needs free radicals as, among other things, they help the immune system to fight disease causing organisms. The answer is to have a balance between oxidative and antioxidative activity and the right level of naturally produced free radicals present.

To explain free radical formation and activity in a simplified way it is necessary to appreciate that stable molecules have the negatively charged electrons circling around their positively charged nucleus in pairs. If one of these electrons is removed by bond splitting or other reaction the molecule becomes unstable and will seek to either take an electron from another molecule or lose the unpaired one from its own system to regain stability. In this unstable form the original molecule becomes a free radical. When the unstable molecule takes an electron from another molecule that molecule then becomes a free radical which then forms a chain reaction.

A situation called oxidative stress occurs when the body’s own oxidation/reduction (Redox) system cannot balance the activity of reactive oxygen species by detoxifying the reactive intermediates or repairing damaged cells. Oxidative stress is involved in a number of diseases such as chronic fatigue syndrome, Parkinsons, cardiovascular disorders and age related conditions such as Alzheimers.

Reducing the adverse effects of free radical activity and oxidative stress can be achieved by consumption of antioxidants which neutralize the instability of the free radical molecules by donating an electron to them and recreating the electron pairs. Antioxidants such as vitamins C and E are able to do this without becoming unstable themselves, a diet including fruits and vegetables is also known to be beneficial for antioxidant properties. For women after menopause antioxidant therapy is particularly important as antioxidant defenses have been shown to be reduced in elderly women.