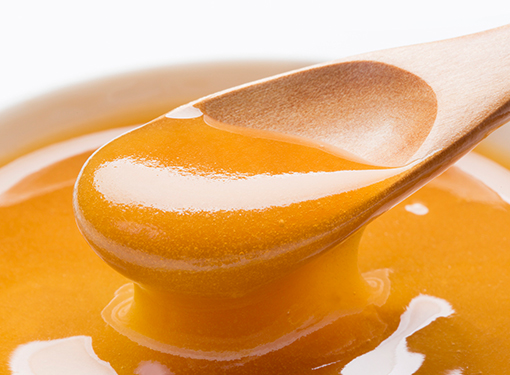 Manuka honey is monofloral honey from the nectar of the manuka tree (Leptospermum scoparium), which grows uncultivated throughout New Zealand and south eastern Australia. The middle of December is the best time to see the lovely manuka tree flowers in New Zealand. “Manuka” was named by Maori people who are the indigenous Polynesian people of New Zealand.

The antibacterial properties of honey are from Hydrogen peroxide produced by an enzyme called glucose oxidase. Manuka honey also contains other antimicrobial constituents that are not seen in other species of honey. The University of Waikato in New Zealand represented the specific antibacterial properties of Manuka honey as Unique Manuka Factor (UMF). Only Manuka honey that is proven to contain a UMF over 10 as determined by the University of Waikato can claim “Active UMF Manuka Honey”. Manuka Honey that is sold as an alternative medicine has been defined as being of a UMF12 or more.

The clinical effects of UMF Manuka Honey against helicobacter Pylori have been reported by Dr. Shoko Honma, in the exclusive women’s outpatient department of Tokyo Metropolitan Police Hospital. The followings are abstract of the report.

H. Pylori is a gram-negative spirochaeta and was discovered in 1983 by Warren March. That the infection of H. Pylori mainly occurs in early childhood is assumed and it is doubted that stored food in unhygienic conditions is a causative reason for the infection. Asaka’s report in 1992 advised that 80% of people older than age of 50, patients of gastric and duodenal ulcer, chronic gastritis and cancer of the stomach are infected, and that there would be approximately 60 million infected patients in Japan. Antibacterial drugs are usually used for the treatment, however, the emergence of drug-resistant strains of bacteria has become a problem.

[ Examinees who are targeted for a clinical trial ]

[ The method used for theclinical trial ]

Each examinee took 1-2 teaspoon(s) of Active UMF Manuka honey three times a day on an empty stomach for 12 weeks in a row. We observed the antibacterial effect against H. Pylori by the urea breath test before and after the trial, respectively. Moreover, we let them have manuka honey as they wished for another 12 weeks and checked the result in the same way as used for the first 12 weeks trial.

One of the examples in Group A was diagnosed with chronic gastritis, always experiencing a heavy stomach feeling. Superficial gastritis was found by gastroscopic examination. However, the symptoms disappeared after starting to take manuka honey, and the examinee has continued to have a cup of tea containing 1 teaspoon of manuka honey everyday for a year. At this point the gastric mucosa was recovered and a gastroscopic examination made with nothing abnormal being detected. After continuing this manuka honey intake for a total of a year and a half, the high number of 105% at the beginning of the trial had decreased by 53% in urea breath test. This was considered to be a good antibacterial effect.